From The VG Resource Wiki
(Redirected from NDS)
Jump to: navigation, search 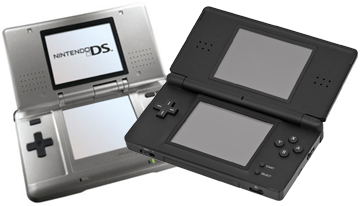 The Nintendo DS is a portable handheld created by Nintendo in 2004.

Console Tool is a program that allows you to view the files in an NDS ROM, and export them.

MKDS Course Modifier views most common NDS 3D and 2D formats (read below) and allows the models to be exported in .OBJ format. It can also view NCG, NCL and NSC files, NARC/ARC archives and SDAT files (including their contents).

For more details on this file format, please visit the Nitro Files page.

The Nitro file system is a set of basic files created by Nintendo that helped developers quickly and easily develop titles for the console. Because of the simplicity of these files and the way they're created, it is the easiest common format on the DS to rip.

Formats include, but are not limited to, the following:

NARC (Nitro ARChive) and ARC (ARChive) files are used to store compressed filetrees in one file (like any archive format: .zip, .rar, etc.). These files can be opened by MKDSCM and NSMBe.

Sound and music archives which often contain everything sound related in the rom. While they can be partially edited by a number of editors (such as MKDSCM, Tinke and DSSoundStudio), the best editor is Nitro Studio, supporting all formats except SSAR, which is only partially supported. Here are the formats SDAT (Sound DATa) files contain:

These are compressed files (using the Lempel-Ziv compression algorithm) - they can be decompressed through several means/programs, like DSDecmp for example.

These formats serve the same purpose as the NCGR, NCLR and NSCR formats. They are used in New Super Mario Bros. and Super Mario 64 DS. They can be viewed by MKDSCM and edited by NSMBe or SM64DSe.

The three currently leading emulators are No$GBA, DeSmuME and MelonDS.

DeSmuME is the most popular emulator at the moment and has the most features (cheat codes, 3D enhancements, some debug tools, audio/video recording, savestates and TASing tools) but is the slowest and isn't as accurate as MelonDS. It has no DSi emulation of any kind.

MelonDS is the most accurate emulator. While the emulator is somewhat lacking in features, it still has 3D enhancements through the OpenGL renderer, savestates and supports online multiplayer. It is also currently the only emulator with experimental local multiplayer emulation. Thanks in part to the OpenGL renderer, it is faster than DeSmuME, but the OpenGL renderer suffers from a number of issues with various games, which is why the extremely accurate but slower software renderer is recommended. MelonDS also has partial DSi emulation on specific test builds.

No$GBA is by far the fastest of the bunch and has the best debug tools by far, however it is lacking in pretty much every other department and has pretty bad accuracy, similarly to most other No$ emulators. Using No$Zoomer alongside it is strongly recommended to make audio emulation more tolerable and changing the screen size. This is also currently the emulator with the best DSi emulation. Only use it if your computer is very slow, for debugging or to play DSi games.