From The VG Resource Wiki
(Redirected from PS3)
Jump to: navigation, search 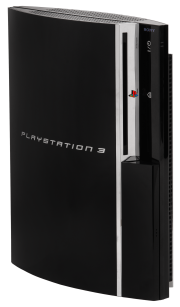 The Playstation 3 is a console created by Sony in 2006. It was infamous at launch for its $500-600 price tag and its lack of interesting exclusives, but over time, it gathered a plentiful library of great titles, both first-party and third-party.

Most PS3 games tend to use different file formats for each game, and a majority of the first-party games currently cannot be ripped from.

The only known working PS3 emulator at this moment is RPCS3. It is being actively developed and can run many games if you have a really powerful computer, but still is at an early stage. Some games such as Demon's Souls and Catherine are very close to perfect but many games do not go past the main menu such as The Last of Us, have graphical problems, run really slowly to the point of being unplayable or lag incredibly (Disgaea 3: Absence of Justice for example). Metal Gear Solid 4 is an known game that doesn't work on the emulator. You can read more at https://github.com/DHrpcs3/rpcs3/wiki/FAQ