This section is primarily for GIMP, but applies to all software. 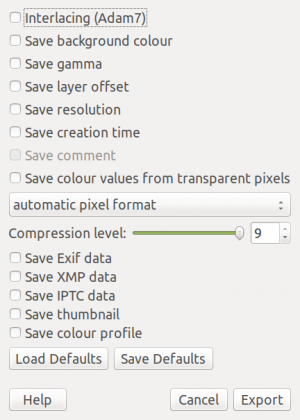 An illustration of Adam7 interlacing over a 16×16 image.

To save space, sometimes an indexed image can be used. This is known by some as PNG8. To use indexed colours in GIMP, load up an image and go to Image -> Mode -> Indexed... -> Convert. The default settings will do fine. This will allow us to create an image that has 256 colours, or 255 colours plus 1-bit transparency. By doing so, space can be saved for low-colour images. Sometimes it is claimed that GIF is superior for low-colour images, but this is rarely the case and is a thought pushed by the lack of knowledge that PNGs can be indexed.

But we must be careful and only index images that have at most 255 or 256 colours! Notice what happens if we try indexing an image with more colours. Banding or dithering becomes visible on the ball as the colour cap has been reached and the gentle transparency has been lost (even if the image had fewer colours this would be lost since either a pixel is transparent or it isn't with indexed images). For our own uses, the trade-off between colour accuracy and file size may be good, but The Spriters Resource aims to archive sprites with zero quality loss. 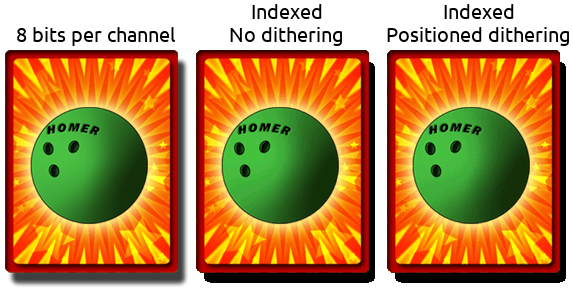 The cons of indexed images

As with all things in life, there's no such thing as a free lunch. So what's the matter with indexed images?

In rare cases, it may be beneficial to save a PNG in greyscale mode. To make an image greyscale in GIMP, go to Image -> Mode -> Greyscale. Assuming we are starting out with a greyscale image, the only time this mode makes sense to use is if we require a proper alpha channel (as opposed to 1-bit alpha), or if we require 256 shades of grey plus transparency. The rest of the time, an indexed image will result in smaller file sizes.

With Firefox and all Chromium-based browsers supporting animated PNGs, there isn't too much reason not to use them if you desire animation. Internet Explorer users will be displayed a static image - it won't completely break for them. Animated PNGs will often offer better file sizes or more colours than animated GIFs, though software that supports creating APNGs is still limited.

PNGs can be no wider or taller than 2,147,483,647 pixels, resulting in a maximum resolution of 4.61EP. Due to current computer limitations, this is never an issue.