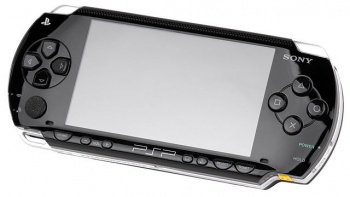 The PlayStation Portable (or PSP) is a handheld game console made by Sony in 2004.

PSP is the only handheld video game console to use Universal Media Disc (UMD) as its primary storage medium.

Most PSP game rips come in the form of an ISO file. These can be mounted or viewed using standard mounting tools, such as Daemon Tools, and the game's files can be viewed using your computer's file explorer.

In some cases, games will come in ".CSO" format. These will need to be converted into an ISO format before being used. There are a number of conversion tools available online. 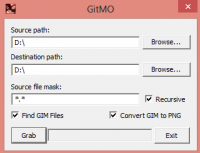 Gitmo is a free tool that finds and extracts GMO and GIM files. It is available for Windows at www.richwhitehouse.com.

In order to use it you need to:

It is also possible to convert extracted GIM files to PNG right away or disable the extraction of GIM files at all.

The main downside of this method is that Gitmo can not extract the files with their original names and directory structure. It makes identifying the models and finding correct textures troublesome, but in many cases it is the only available option.

TextER can be found for Windows at www.romhacking.net. It allows you to extract .GIM files found within other files. This method doesn't return the correct file names, but the benefit it gives over Gitmo is that it can be used from a command line, gives a better file name as a result, and often produces more reliable results.

A batch file can be created to make ripping GIM files from multiple containers quicker. Save the code below into a ".bat" file, and include it in the same file as texter. Running the .bat file will then extract any gim files found within all of the files in the same folder as both TextER.exe and your batch file.

Can be used with several common sprite, texture and model formats for the PSP, as well as a number of specific PSP games.

PPSSPP comes with a graphics viewer that not only draws out the frame, but also presents sprites in their entirety depending on the game used.

GE Debugger can be accessed in the Debug menu, or by pressing Ctrl G, at any point during gameplay. 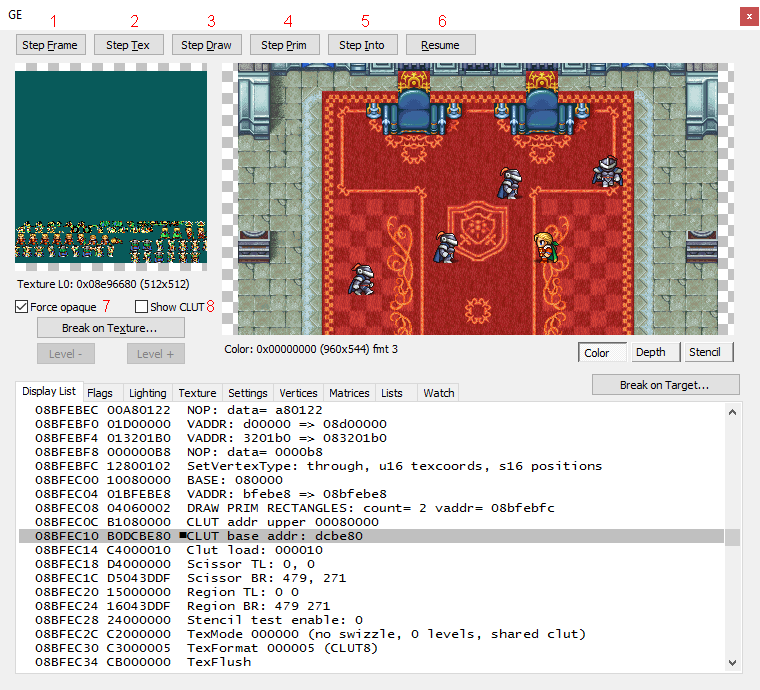 It is best to pause the emulator at the point you wish to view or rip sprites by pressing F8 as it will not automatically pause once the window appears. Afterwards, click on the emulator and unpause it. The first time will still freeze the emulator, but afterwards, you must press one of the "Step" buttons in order to halt progress.

When accessing a new frame, the entire scene will be washed out, leaving you to press any of the "Step" buttons in order to draw the scene in. There is currently no known way of saving either the background or the CLUT other than printing the screen and pasting it to a paint editing software.

For Backgrounds, it's best to use "Step Tex" to draw the scene as it appears (minus any passable objects), then Print Screen to whichever paint software you desire, then continue drawing the frame until the rest of the background is presented, or combine them with tiles matching whichever part of the object is tangible.

For Sprites, make sure "Show CLUT" is unchecked. GE draws the frame from back to front, meaning the tiles for the farthest background will be drawn first. Press "Step Tex" until you see the incomplete background, then use "Step Draw" while paying attention to the CLUT on the smaller window until the tiles switch to the current sprites in the area. Check "Show CLUT" and you will quickly notice that the sprites are too small and pixelated to be ripped. That's because both windows, by default, shrinks the sheet to fit their dimensions. Double clicking the window the CLUT shows up in will zoom them to their proper size, so all that's left is to find the appropriate sprites by clicking anywhere within the window and dragging it around until the sprites appear.

Jpcsp is a Java PSP emulator, which has more compatibility than PPSSPP. It can rip 3D models from games.

In order to do this, you must load a game, find it in the UMD browser or the file opener. Then play where you want to rip the textures. The, click on File > Export 3D Scene, then click on visible or all 3D models. Then go to export, on the JPCSP folder, and go to the recent one. This won't work sometimes when playing original games on Namco Museum Battle Collection, or some different reasons. If you try opening the .obj file like that, it won't load, but if done correctly, it can be usable. 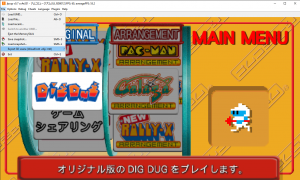